The BC herbarium of the Botanical Institute of Barcelona (IBB) is the third most important collection in the Iberian Peninsula with more than 800,000 sheets, including the general herbarium, historical and cryptogam collections. It is estimated that it includes around 10,000 type sheets i.e., specimens on which botanists used to describe new taxa (species, subspecies or varieties). Recently, the virtual catalogue of nomenclatural types has been published which allows users to discover these specimens, consult their data and see their images.

Type specimens are of vital importance to botanists trying to determine the correct application of a name, and are often kept and computerized separately due to their heritage value. There are several categories of types and the most common are:

The virtual catalogue has a search engine that allows you to search types by genus, species, infraspecies, collector and by country of origin. The search results allow knowing all the information regarding the types: locality, collection date, exsciccata, name of the collector, the related image or images and it allows users to find it in the GBIF biodiversity database. 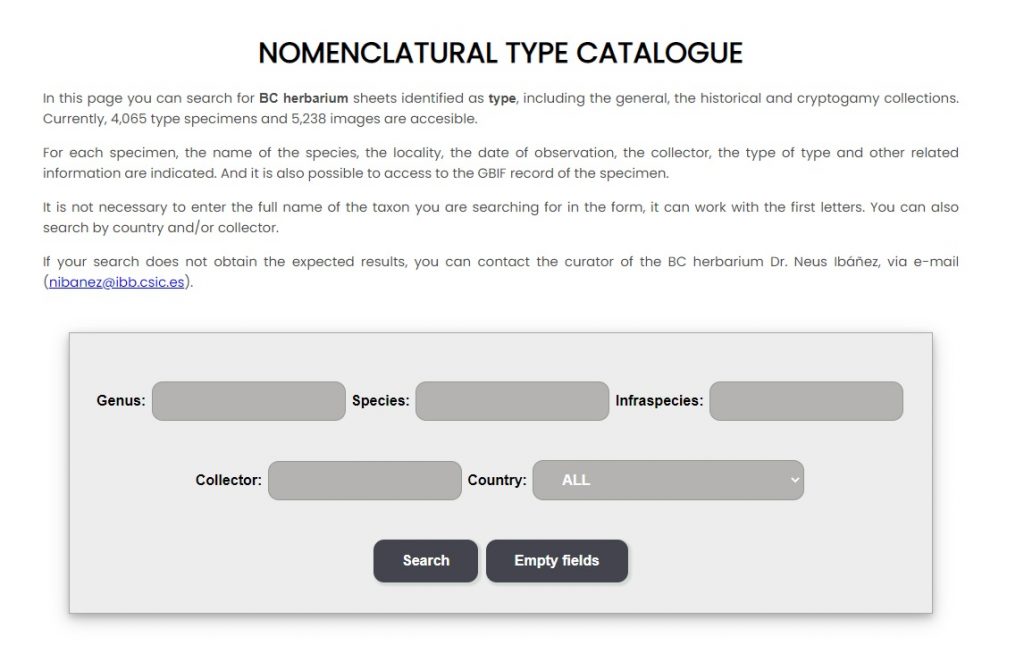 Among the types currently available, 56.6% correspond to taxa described at species level and between the infraspecific epithets, the most predominant are variety names (30.1%). The types have been collected in 48 different countries, the most common being Spain (41.1% of the types) and Morocco (32.3%). The catalogue includes types from the different collections kept in the BC herbarium, mainly from the general herbarium and historical collections and cryptogamy collections, indicating the type of type whenever possible.

* Includes those types that are not identified by type of type.
** Includes doubtful types or other specimens considered to be of taxonomic interest, such as epitypes (specimen chosen when the lectotype or holotype are not sufficiently clear for identification of the taxon), paratypes (other specimens cited in the original publication for the author of the taxon) , topotypes (specimens collected in the locality where the taxon was described) or examples of names that were never described anywhere and are considered, according to the nomenclature code, bare names or nomen nudum.

The heritage preserved in the IBB is very extensive: from the Salvador’s Cabinet (which is open to the public), the BC herbarium with its historical collections or the IBB archive, where documentation of the foundation of the centre, correspondence of important Catalan botanists such as Font Quer or illustrations by artists such as Suzanne Davit or Eugeni Sierra are preserved. The IBB has been working for years to improve the accessibility of its heritage and has demonstrated this with the various digitizations of the herbarium and the possibility of consulting them online, the publication of the Salvador collection in #museuobert or the virtual exhibition of postcards from the collection Carlos Pau.

The virtual catalogue of nomenclatural types of the BC herbarium is a further step in improving the accessibility of the IBB’s heritage and is expected to be a useful tool for both researchers and the public interested in botany.